Singularity U Day 2: After Hours with Peter Diamandis 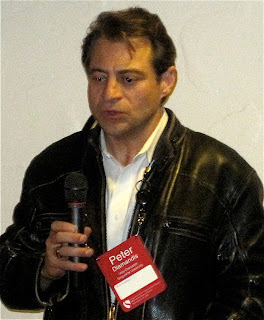 After dinner on day two of Singularity University, Peter Diamandis gives a fantastic presentation about the X-Prize and what it means. This is a guy who radiates energy, seriousness, and goodwill. He would have made a first-class motivational speaker, but he’s focused on substantial issues and favors leather jackets over sharkskin suits.

The man doesn’t think small: “My mission on this planet is to be an agent of transformation for the human race moving beyond planet earth,” he says. Which would seem pompous if he didn’t walk the walk. Over 90 minutes, he shows the assembled SU students how it’s done. “if you don’t do what you love,” he counsels, “do something else. Because all of it is hard.”

Diamandis’ approach is to imagine the world as he would like it to be, chart a course to that destination, and identify the first possible stop along the way. If the larger aim is to diversify humanity’s habitats in the universe, then a first logical step is the Ansari X-Prize for private space flight. (That’s not the first step, actually, but the third or fourth — but it makes the point.)

The scope of his accomplishment becomes obvious as he runs down the list of results: “We brought a new industry to market, made the front page of Google, generated 6 billion media impressions, and ended up with the winning vehicle hanging from the ceiling of the Smithsonian Air and Space Museum — right above Charles Lindburgh’s Spirit of St Louis. So cool.”

To have an impact, he says, prizes need to attract the right contestants, set a clear, doable goal, make a huge splash, and allow the contest organizer to retain media rights. Do it right, and you’ll attract capital to the problem you’re hoping to solve, pool brainpower worldwide, make heroes of the winners, and change the world’s perception of what is possible. And he’s ready to do it many times over, with competitions underway to revolutionize transportation, genomics, medicine, bionics, brain-computer interfacing, and undersea exploration. The latest prize, for a lunar lander design, was awarded only a couple of weeks ago.

It’s in the activities of another of his enterprises, Zero G, that the human dimension of his work shines brightest. A while back, Stephen Hawking asked for a ticket. “I was told I would kill this guy and ruin my company,” Diamandis says, but he wasn’t going to pass up the chance to introduce the world’s expert on gravity to zero gravity.

It took six months to get the FAA to drop its requirement that passengers be able-bodied, and when the wheelchair bound astrophysicist was finally aloft, he cajoled the flight crew into flying not one, not two, but eight parabolas. The scientist is paralyzed except for a few muscles in his face, Diamandis says. Yet in the photos Diamandis flashes on the screen behind him, his customer wears a child’s wide-eyed grin.
Posted by Ted Greenwald at 4:49 PM