The first part of Merkle's talk was a 40,000-foot flyover. The second part shifted into hyperdrive. Feels like a college term packed into 90 minutes or so.

How do physics change at nanoscale? Merkle ticks off a list. Length scales down linearly. Area scales down by a factor of a 2 - it gets exponentially smaller - and volume by a factor of 3. Frequency gets faster. Time changes (a nanosecond is a sensible interval for a molecular machine). And so on. Interesting points: Speed doesn't change; a walking pace is reasonable for us and for a nanomachine. Gravity disappears Magnetism drops off. Stiff things become floppier and more subject to thermal noise.

From there, we dive into the structure of atoms, with probabilistic electron cloud surrounding a point-mass nucleus (for most practical purposes). Wrap that up with a few basic forces, and you have the basis for modeling atoms and their interactions fairly accurately. And once you can do that, you can think about atoms as building blocks of nanomachines.

So what can you build? A nanotube - a sheet of graphite rolled into a tube, or concentric sheets rolled into concentric tubes. Merkle mentions two concentric tubes, which make a molecular spring; pull one end out, let it go, and it pops back in, courtesy of van der walls force. Unlike a macroscale spring, this nanospring snaps back with the same force no matter how far you pull it out.

These days, though, Merkle is setting his sights much higher. Over the past few years he has put together a theoretical system for building diamond, atom by atom. It involves nine molecular tools and methane/hydrogen feedstock on a diamond substrate. He has analyzed all the side reactions, he says, and shown why they won't throw the process out of kilter. "This is the first effort to define a minimal tool set for positional diamond mechanosynthesis," he says. "It's hard," he says - an understatement - "but it ought to work."
Posted by Ted Greenwald at 3:16 PM No comments: 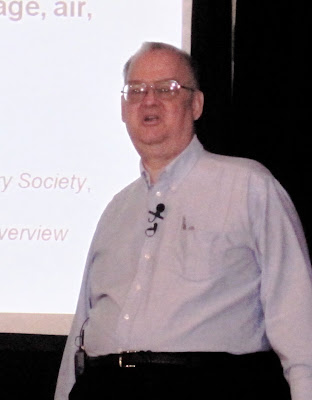 "If you rearrange the atoms in coal, you get diamond. If you rearrange the atoms in sand, you get silicon. How atoms are arranged is fundamental to all material aspects of life," says Ralph Merkle, currently senior research chair at the Institute for Molecular Manufacturing. He's a large, pear-shaped man who, as he speaks, waves his arms far more energetically than his physique would imply. He modulates his tone dramatically for effect, often humerous.

Those words kick off day 2 at the SU Exec Program. The curriculum divides roughly into three days of intensive classroom introductions to critical tech domains, three days of visits to Silicon Valley companies, and two days of workshops devoted to specific industries, plus a final day to wrap up. Yesterday I settled gingerly into a lightly padded metal chair for highly compressed, sometimes super technical, up-to-the-minute overviews of artificial intelligence, robotics, networking, computing, and quantum computing. (Forecast: sunny! With patchy clouds and fog.) That took until dinner time with only a quick break for lunch, which was filled with presentations by graduates of SU's nine-week summer program.

Merkle differentiates between "linear nanotech" like stain-resistant textiles and the real thing: molecular machines first suggested by physicist savant Richard Feynman. "We can arrange atoms in most of the ways permitted by physics," he says, showing a slide of a tabletop molecular assembly machine that can make "pretty much anything you want." Can we get that far? "We can get at least that far."

From there he skims through a catalog of progress - familiar example of pushing atoms into IBM logos and such on a 2D grid - to the goal of 3D shapes, and ultimately nanoscale machines. It doesn't always work. "You're not seeing the failures," he allows, and describes a planetary gear he built that was just too slippery to hold together. "There's no friction at that scale." Moreover, that style of assembly is one atom at a time - very resource-intensive. A better solution is self assembly, along the line of, say, a redwood tree - a huge structure self-assembled by nanomachinery. If we can accomplish that, "manufacturing costs will go through the floor." Products of nanomachinery will be as cheap as potatoes.

The notion that nanotech will provide new materials with superior strength-to-weight characteristics or other cool properties is familiar. Eye-opening proposals: Respirocytes (carry oxygen in the bloodstream so you can hold your breath for an hour), microbivores (eliminate diseases more rapidly than they body's own system), chromallocytes (removes chromosomes in a cell and replaces them with a new set). Finally, Merkle sketches out a single-stage-to-orbit vehicle made of specific (theoretical) nanomaterials that apparently has been designed by someone in a published paper, name and title I didn't catch. Bottom line: It could transport four passengers into space for a few thousand dollars.

Next: A quick intro to molecular mechanics.
Posted by Ted Greenwald at 10:52 AM No comments:

Day 2 is already racing by. Yesterday was over before I knew it. The action didn't let up from 7:30am (breakfast) through 10:30pm (wrapping up a break-the-ice social exercise).

I kept expecting to get a few minutes to compose a post, but it never happened, and before I knew it I was driving up 101 toward home, thinking about all the things I wished I had blogged. SU in its first day challenged my capability to assimilate and disseminate information and perspective.

I haven't settled on a strategy for catching up, but I'll make it a point to keep up today. As I type nanomeister Ralph Merkle is giving a fascinating overview of the state of the art of molecular manufacturing, and he'll be followed immediately by someone equally edgy, possibly as brilliant.

So I beg your patience. Please stay tuned.
Posted by Ted Greenwald at 9:31 AM No comments:

SU's Exec Program kicked off last night. Here's the post I didn't manage to upload before I conked out:

It's boot camp for geeks - literally. A security guard checks my driver's license as I drive into the entrance to Moffet Field, a disused naval airbase that hosts the nascent Singularity University. Night has fallen, but it still feels like entering a top-secret installation out of a James Bond movie, crowned by with strange arched buildings and adorned by sculptures of airships. The Singularity University Executive Program is small - one-to-one staff/faculty ratio, according to executive director Salim Ismail, formerly of Yahoo's tech hothouse. Inside an elegantly appointed Spanish-style palace, some 30 students assemble, a bright, well groomed group of 30 to 50 somethings representing a dozen industries and nearly as many countries. 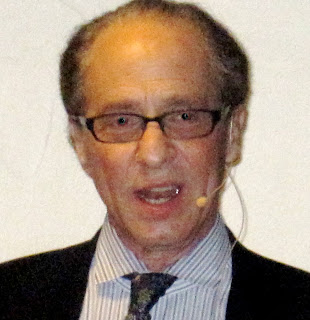 The SU administrators shoo the crowd into an adjacent room where rows of chairs have been arranged to face Kurzweil's slide show. After introductions from Ismail and X-Prize founder Peter Diamandis, who is clearly the driving force behind the school, Kurzweil steps in front of the assembled students. He's a surprisingly unimposing character, a sort of Walter Mitty for the Facebook age. A casual mention of pills leads him to root around his pockets, looking for the vitamins, minerals, and who-knows-what he pops hourly to slow down the aging process so he can live to see the Singularity - the moment when machines overtake human intelligence and human history shifts into hyperdrive.

He begins by taking on his critics, which he does periodically throughout the address. "They say, Kurzweil underestimates the complexity of - fill in the blank. I agree with critics about the challenge. I disagree about the power of the tools we'll have to solve the problems at hand." The essential point is that humans are geared to linear change - say, an elephant charging across the African veldt. But evolution - both biological and technological - happens exponentially, clouding our view of the future. Exponential change is inherently counterintuitive, so we underestimate its power. "30 steps linearly is 30 steps," he says. "30 steps exponentially is a billion."

For the next half hour, Kurzweil rifles through graph after graph showing how technology is changing exponentially - in all fields, in all eras. It's a compelling presentation that leaves the audience slack-jawed. Some are resistant, though. What happens when terrorists have the same capability to re-engineer viruses that makes it possible for medical science to disable them? Won't politics and economics to derail technology? What about capital - does it grow exponentially as well? The futurist deftly swats down such questions like so many pesky mosquitos. Concerns like that arise from linear thinking. A quick look at history confirms that human problems stimulate technological solutions that then yield further exponential evolution. I'm not entirely convinced, but it's hard to disagree with the man's logic.

Kurzweil poses for some group photos and then runs to catch the next flight back to his home near Boston. The inaugural SU Executive Program is underway. Classes start tomorrow at 8:30am.
Posted by Ted Greenwald at 10:47 AM No comments:

If the Singularity is coming, it'll happen first at Moffet Field. The disused naval airbase 30 minute' drive south of San Francisco is the site of Singularity University, where I've signed on for the first-ever executive program. This is the nine-day program's maiden voyage, and the SU geeks - led by uberfuturist Ray Kurzweil and professional game changer Peter Diamandis - have signed on a stellar faculty, including 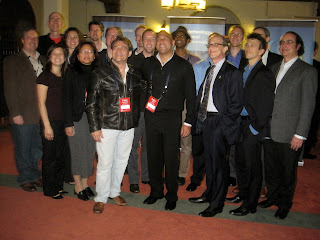 Kurzweil himself kicks off the festivities tonight at 7:30pm with a keynote address. I'll be blogging the speech and more over the coming week, hopefully giving you a nanobot-on-the-wall view of goings on at the Singularity's epicenter.
Posted by Ted Greenwald at 1:54 PM No comments: